The Purpose of the World Mandala

The complexities and non-linearities of the world system are increasing the mismatch between the way we think about the world and the actual behaviour of the world. In systems science, this is summarized by expressions like unintended consequences, counter-intuitive outcomes, emergent properties, synchronous failures and unpredictable knock-on effects. This whole field has been summed up as the global problematique. Increasing the match
between our espoused world models and the behaviour of the real world in policies, strategies and decisions requires a major shift to holistic transdisciplinary approaches.

The World Mandala is based on a world system model that is designed to promote holistic and transdisciplinary conversations across 12 key dimensions of sustainable communities. The model serves several purposes ranging from a ‘World Game’ that groups of
people can play to strategic workshops that challenge decision making beyond conventional
scenario planning methods, to ways of mapping global impacts of climate change.

The Structure of the World Mandala 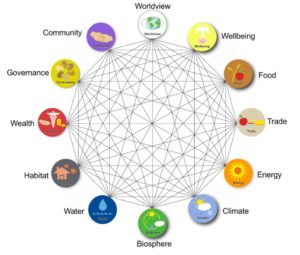 Each of the twelve nodes has a specific role and contribution to the overall socio-ecological systems in which we live. The words labelling each node are specifically chosen for ease of reference and memory. Each of them packs a domain of complexity and takes on different focus and relevance depending on the practical application of the Mandala. An idea of some of the complexity is given in the following table.

Expanded Meaning of the Nodes

Systems Thinking Behind the Mandala

These are the main features to be noted.
• It is a set of 12 interdependent mutually relevant factors, each factor indicating a component (referred to as a node) in the system essential for viable human life in the context of the earth system.
• The 66 interconnections mean that a change of state in any given factor may trigger, induce or otherwise modify a change of state in another factor.
• Each factor has a condition which is the state of health or viability at a given time.
• This condition is not static, but it is changing and thus reveals a trend or direction of change.
• The direction of change may be towards increased viability or decreased viability.
• A trendmay accelerate or change direction such that it becomes a discontinuity which generates a shock or surprise. This could be positive or negative in relation to viability. Common terms for discontinuities are trend-break, tipping point, peak and runaway condition.
• Discontinuities in a given factor often have greater cross impact on other factors and can create a domino effect in which the effects ripple throughout the system, causing multiple parallel discontinuities. There are counterintuitive instances where actions in one node, seen as solutions when viewed in isolation,
actually create problems in other nodes if these are disregarded and there are not synchronous adjustments.
• It is possible that multiple discontinuities may occur simultaneously without interaction or direct causal connection. This can lead to synchronous failure (Homer-Dixon, 2006) or synchronous success in terms of overall world viability

Its Foundation In Cybernetics

A key concept in cybernetics is variety. This is the number of possible states of a system. Needless to say, the number of possible states in the actual world system is astronomical. Ashby’s Law of Requisite Variety (Ashby, 1958) states that only variety can absorb variety. Yet, we humans with low variety governance claim to ‘run the system’. In cybernetics, variety engineering is the skill of designing regulation and feedback such that requisite variety is achieved. The term requisite implies that absolute matching is not necessary (or feasible) but that there is a minimum complexity required in the regulator of a system. If this is not the case, the regulator is too simplistic, then its intended control actions are likely to make the system more out of control. The areas of diversity that are interacting and need to be regulated  are matched by a commensurate diversity in  the guidance system; variety attenuation must be intelligently designed.
This point is very critical when we consider the resilience of social ecological systems. Applying the Conant–Ashby Theorem (Conant and Ashby, 1970), that ‘every good regulator of a system must be a model of that system’, we are faced with the challenge that, whether we are considering a city or the whole planet, resilient governance should require extremely well-designed governance models that are based on consideration of the  whole as a system`

The requisite variety of the world system model derives from the combination of the 12 nodes and the significance of the 66 interconnections. Some basic statistics of the model indicate how it generates variety. Here is a basic analysis. Suppose that each node can be changed by one of two kinds of policy, helpful/unhelpful. This indicates that the number of possible input states of the system is 212, which equals 4096. Even on a binary input model, we know that the nodes are interconnected. Formally, everything is connected to everything else, but we also know in the real world that connections vary in quality and intensity. The state of any node might have an effect on every other node; that is, it can affect 11 other nodes, thus making up the 66 connection lines. These resultant effects are not necessarily equal across all the connections.

The Problem With Conventional Governance and Organisation

If we apply the reductionist paradigm of splitting into parts and solving the parts, hoping we can put them together and guide the whole system, we are not only mistaken; we are set up in this current world to make things worse. ‘All the king’s horses and all the king’s men couldn’tput Humpty together again’.

The world system model diagram is, to the active eye of the beholder, a gestalt. It is a holistic pattern that holds together a wide diversity of factors and helps the mind hold attention on a bigger picture. Psychologically, the familiar pattern of the circle enables a complex pattern to stabilize in people’s minds in a recognizable and even comfortable way. This is reinforced by the presence of 12-ness in different aspects of Western culture from clock faces to zodiac
signs. In Eastern cultures, a similar approach occurs in the use of mandalas and yantras.

Other Techniques of Using the World Mandala

A Typical Process for Application

Reviewing the Status of Connections 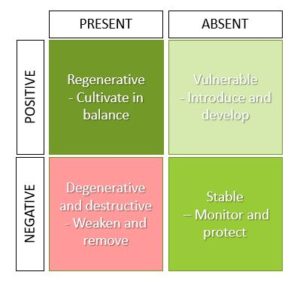 Reviewing the Strength/Weakness of Synergy

1.Create a harmonious effect with other nodes

2.Be supportive to other initiatives

3.Make more effective use of resources

4.Create more resilience in the system

8.Extend our common platform for learning

How to Use this License

Read about Open Access to H3Uni Methods and Materials